Welcome visitor you can login or register

BLOG How to speak to your Son’s heart

How to speak to your son’s heart.

Well we live in very interesting times and to be honest as a society we have come a long way. I personally am proud of how far women have come with the social and class struggle of the past 100 years or so and I welcome and love to see women succeed in business and whatever they put their minds to. Unfortunately some men and I must stress not all men. Some men for  what ever reason do come to the point of physical abuse of women and I must say no reason is good enough.

Now to be realistic as humans in our history there has always been the strong that have used their strength against the weak. Unfortunately I believe as humans there will always be this in our DNA for some time yet. I do believe that this DNA is in both men and women. Women can be violent and abusive too.

When talking on domestic violence we must know that not all domestic violence is perpetrated by men. I know personally know many men that have been on the viperous end of attacks both verbal and physical from females. Unfortunately because we teach boys to be tough and just be a man many incidents go unreported. Now I am not going to get into the whole domestic violence issue I just want to merely mention socially the issues.

Now women are generally less physically stronger than men as a general rule. So as general rule women tend to use their minds as a weapon rather than physical acts.

Many of the ladies I speak to tell me that girls in high school were the worst, clickie, snipie, back stabby, and downright bitchie girls they had ever come across. I have also been told by the same ladies that some of the things that other girls told them in high school they still carry today. But that’s for another article.

Now getting back to the issue at hand. We know that right from an early age girls realise that they don’t share the same physical strength as boys. Now as girls grow up they still have that wired into the subconscious mind that men can be treats.

Now society is so wired to totally destroy domestic violence and that’s a good thing we unfortunately stop boys using their strength for good.

Let me explain. A while ago I was talking to a mum friend of mine with a young boy. “I said we should have a play date and your son can come and play we have plastic bows and arrows with suction caps, army dress ups and cowboy suits and cap guns and policeman’s dress up’s and foam dart guns they will have a great time together”.

She said “Oh that won’t do we don’t allow our son to play with toy guns or anything dangerous” I said “Wow how come?”

She replied “Well we don’t want our son to grow up being violent”.

“Well that’s interesting “I said. Are you open to a different thought on the topic?

Do you want your son to look after a woman get married and be a responsible protective father? Or in the future let’s say you get into trouble when you’re a little old lady would you like a police officer to save you from an intruder inside your home? Or what if your home caught on fire would you like a strong fireman to break into you home with an axe risking his life without knowing you and carry you to safety?

She knew what the answer was and I could tell she didn’t want to admit it as she sheepishly said “Yes”.

Well if you want all those things in our next generation you need to let you son play with dangerous items it doesn’t mean he will instantly make him violent any more that letting your daughter play with you high heels make her a prostitute. If the items make the act then our prisons would be full of guns, knives and high heels.

I get that you don’t like it,but your son craves it, the question on his heart is am I dangerous? Do I have what it takes? Will I be able to pull through when the chips are down?

His questions are no different to the female heart. Your question is do you see me? Am I beautiful? Do you delight in me? Could you imagine the crap storm I would get into if I said I don’t think women should wear makeup and girls shouldn’t play with dolls because it grooms them for motherhood or prostitution? OH MY I could see it now I would be on 60 minutes.

So long story short let your boys be boys. Let them play fight, dress up as policemen and play Army,let then imaging being a firefighter or running around the back yard fighting dragons and rescuing the lady in the tower.

That sound like a good title for a book. Dangerous for Good (A journey into manhood)

Pre-order your copy and get your name printed as a supporter inside the book. 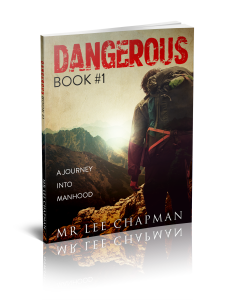